Expert in Fluid Dynamics and Thermodynamics

Underground spaces are the veins of modern societies and air is the lifeblood for those who have to be present in these spaces - temporarily or continuously. Tunnel ventilation is an indispensable asset and hence integral part of such projects. It does therefore constitute a crucial discipline for the concept, the design, the construction and operation of underground spaces.

To add to this, the tunnel ventilation system represents a high value asset with significant value by itself but even more so as it defines the safety level of the overall project. Modern societies become increasingly aware of and critical about of the safety in underground spaces and the failure to reach the highest standards (within reason) in this field is no longer tolerated and represents significant project and operational risks.

I am specialized on the design and the professional assessments for tunnel ventilation systems, from the ventilation of an emergency exit over a road or rail tunnel to a full blown mega project like I am currently involved in in Saudi-Arabia. As the experience shows there is a lot of potential for a client to get a better, safer, more performant tunnel ventilation system with lower investment and operational costs - and this is where I can help with my experience.

Dr. Alexander Rudolf was first exposed to tunnel ventilation and train aerodynamics in 1994 as a scientific assistant at the EPFL. He developed the simulation tool NUMSTA(R) as his PhD topic for Swissmetro (a predecessor of today's Hyperloop), which allows to calculate the aerodynamics of trains in a partial vacuum.

Since then he has remained loyal to the topic of ventilation and aerodynamics of railway, metro and road tunnels and has been able to contribute to first-class projects worldwide.

Dr. Alexander Rudolf was first exposed to tunnel ventilation and train aerodynamics in 1994 as a scientific assistant at the EPFL. He developed the simulation tool NUMSTA(R) as his PhD topic for Swissmetro (a predecessor of today's Hyperloop), which allows to calculate the aerodynamics of trains in a partial vacuum.

His scientific exposure to high speed underground rail with partial vacuum led him to contribute to the ventilation and aerodynamics of a number of high-class railway, metro and road tunnels world-wide.

Since 2007 he offers planning, consulting and expert services for the aerodynamics in road &rail tunnels and energy technology in general. His focus is on

In addition to a long list of reference projects for railway, road, pump storage plant and construction site ventilation (see page References), he has provided the following significant original contributions to the aerodynamics of large vehicles and for the ventilation of tunnels:

He has been the first to be publicly appointed and sworn as appraisor for Tunnel Ventilation and Tunnel Aerodynamics in Germany by the chamber of commerce (IHK) Hochrhein-Bodensee (Konstanz) in 2013 (renewal in 2018). ​

The ventilation of rail and subway tunnels has become one of the focal points in any tunnel project. Several accidents have rendered regulations stricter.

In road tunnel projects, beginning in the year 2000 the focus has shifted from fresh air supply to control of smoke propagation in an emergency.

While ensuring a high safety level and system availability, there is always substantial pressure to reduce costs during all phases of the project, i.e. the planning, the realization and the operation. 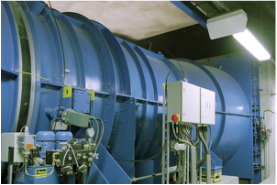 It all started with the computer programm NUMSTA (R) developed for the Swissmetro project (similar to what is now Hyperloop). It allows to simulate the wave propagation in road and rail tunnels and thus to obtain the time dependent flow values in such systems.

The simulation programm has been developed continously.

Now, it can be used to answer very specific questions about the flow propagation in complex tunnel systems including compressible effects, thermal effects, vehicles and fans. 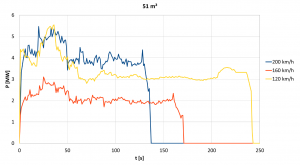 Expert Services can be delivered for public and private clients, such as construction companies.

We can deliver officially appointed appraisals in tunnel ventilation and tunnel aerodynamic projects.

We can also deliver appraisals for projects involving similar subjects, such as HVAC and energy. 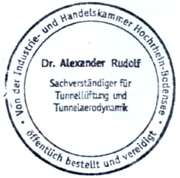 SELF-EMPLOYED WITH COMPANIES IN SWITZERLAND AND GERMANY

Expert in tunnel ventilation and aerodynamics

2001 Member of the Scientific Exchange Group of DaimlerChrysler